It’s while TO1USB activation in Guadeloupe, where I could test in real conditions the setting of a portable ham radio station that I wanted QRV on 50MHz, 28MHz, 21MHz, 14MHz, 144MHz, 432MHz only on USB mode.

Not so easy in portable on a island between compromise of easy to travel and antenna performances. For the transceiver, no problem, the ICOM 706 MKIIG is a real good rig to operate quickly on 6 bands with 100 Watts from 14Mhz to 50Mhz, small and easy to carry out.

To return to the antenna question I need to be QRV on 6 bands HF+VHF+UHF but especially be able to assembly and disassembling antenna quickly and even for a single person alone to do it.

Here is what looks like the final result and solution founded : 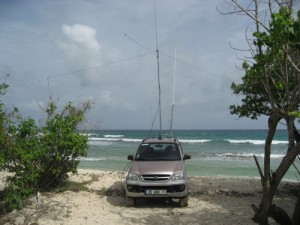 I was on the coasts of Saint-Francois towards La Pointe des Chateaux in east of guadeloupe island that offers good conditions for DX, the large-ground being a calcareous plate, and in addition with the sea in edge of beach offering a very good plan of ground. 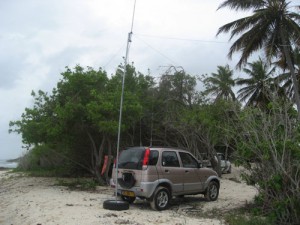 The key is in the 4 wheels vehicule.

It’s by examining the 4 wheels that the solution was found, in the simplest possible way: the clamp of the door spare wheel like support of the antennas. 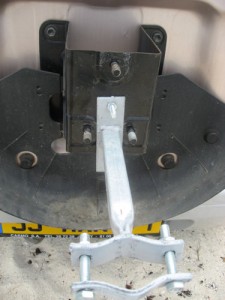 Then it was very easy to find a TV adaptator support for about 20 € at a local store, and get a solid fixing for antenna. 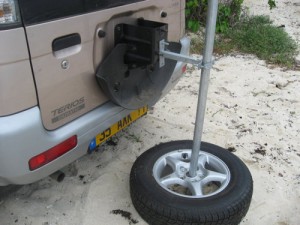 The spare wheel is also very useful in the assembly, by using it like arm of lever to assemble and dismount the 7 meters from ground antenna support, even being alone to do it. 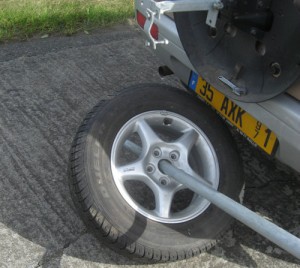 Lastly, it remains to attach the 3 wire radians which are used to solidarize the unit in particular when there are some wind, very often at this period of the year in guadeloupe island because of the hurricane season.

Here is the arrangement adopted in the 4 wheels to preserve sitted places and succeed to put everything in the car:

Some results, nearly 500 DX QSO were realized with nice report of 59 in Europe, not so band with 100 Watts, vertical antenna and especially in the very lowest of the solar cycle whose return is envisaged as of January 2008.

We have improved antenna sand installation, with the great help of Léontel and Jean-Michel, in the heights of Deshaies (Basse-Terre), 12 hours before the Dean Tropical depression. We follow evolution of Dean in real time on cellular thanks to SXM Cyclone services and also on air thanks to local ham radio during all the activation.

Everything was ok for both all 3 of us and the equipement, the DX conditions was great like we expect just before Dean and return very low after Dean for few days, also due to the hight volume of rain after a cyclone.

Thanks all for QSO, and QSL, the first one was send this week.